“So what have you been up to lately ?” people ask. “ Well. I have a film in preproduction.” I say. Which seems to sound more sophisticated than saying “I have been waiting for a music licence for what seems like an eternity …..”

As a choreographer and filmmaker I dabble in copyright. In musical copyright, that is. In other words, I get to wallow in the privilege of seeking approval from the rights holders to be able to use the music I choose for a choreography, a film or both.

This process may appear to be straightforward. You identify the licence holders (The recording company, publisher or anyone else ), send them a simple email with a simple question, then you wait for the reply which you think will amount to a YES, a NO or a Maybe for the right price. Music rarely comes for free.

But that’s where you get fooled.

When I was working on my first dance film, Steadfast, I made a quick and clear decision about the music I wanted (E.Satie: Gnossiennes). And the recording. Choreographers and music lovers out there know how important the recording is. But in this case I simply couldn't find the holder of the rights. He was stated in the downloaded piece but he was untraceable. I made a few futile attempts to track him down myself (he appeared to be a private individual), but my efforts largely amounted to nothing. I had to step it up and employed the services of friends, friends of friends, acquaintances, remote acquaintances. Soon the search branched out and its complexity resulted in an exercise worthy of an episode of CSI. To cut a long story short, I did find the respective licence holder eventually. He was very forthcoming, and offered the rights for a surprisingly affordable fee.

On another occasion, when working on the Unicorn for Peter Linnett, after sending a licence request, I received a personal email from Jake from Warner Music assuring me that their team in China has started work on my ‘case’.

This was four years ago. The ‘case’ was obviously very complicated. Needless to say, we had to choose a different piece of music.

Fasttrack to March. Warner now have a more sophisticated online form which should accelerate the whole music licensing procedure. Hooray…..or not ? Curb your enthusiasm. I have filled in their form twice. The promise was that they would deliver an answer within 3 weeks. It is now July. The clock is ticking. I am still waiting. The Elusive Music Licence Saga continues… 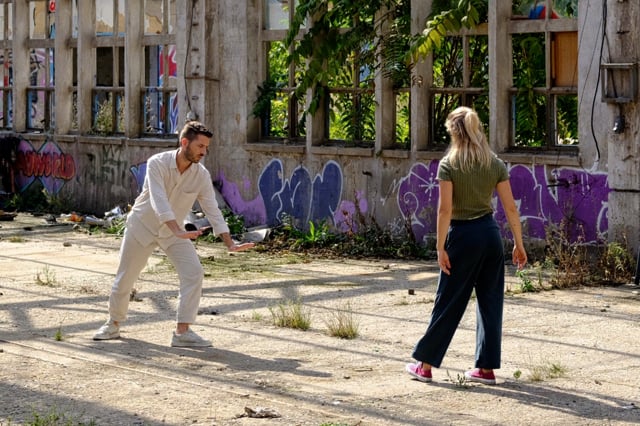 A New Dance Film in the Making

Rehearsal in the Time of Corona